This is a repost of an article originally published on Medium.

Reversal Trading is a Gunbot method to accumulate assets while prices drop, without spending more than already invested before the dump.

Do you like using stop loss orders? Reversal Trading is a very elaborate kind of stop loss — one that uses the stop loss proceeds to accumulate more quote units while the market goes down.

This is going to be a long read. In this article, I’ll try to explain how to use RT effectively and describe the risks involved with every step of the process.

What Reversal Trading does

What RT does is a multi-step process, here’s a simple example:

This process does not have to be 4 steps long. It will just keep trying to accumulate when rates keep dropping, repeating steps 3 and 4.

RT is a stop loss process that uses the proceeds from the stop loss order to accumulate more quote units. but there’s more on this Gunbot Reversal Trading Ultimate Guide so keep reading!

A few things to keep in mind when reading the rest of this article:

Sounds good, are there risks involved?

YES. Trading is always risky, Reversal Trading is no different and comes with its own set of advantages and trade-offs.

Let’s go over the main difficulties that can happen during the RT process, referring to the steps shown in the image above:

Buyback orders are a real risk, they lead to a loss of quote units every time they happen. This pushes the break-even point upwards.

“RT hodling” is not fun, but in the end, you’re no worse off than when you would have used a regular stop loss.

The available options for reversal trading are a lot more complex than the basic — and essential — steps described above.

The good news is that you don’t need to use all the options to effectively accumulate. The bad news is you’ll want to use some of the options, so you’d better learn about all the implications.

Let’s look at all available types of RT orders, how they help the accumulation of quote units, and how they can be triggered:

Trigger: A percentage below any last buy order. Configurable with RT_GAIN.

Accumulates? No. This is a stop-loss type of order. Naturally, this hurts quote accumulation.

The proceeds from this sell order will be used for the next buy order.

Trigger: A percentage below the previous RT Sell order. Configurable with RT_BUY_LEVEL.

When you use trailing, you can experiment with smaller distance and larger trailing range, you may accumulate on average and miss less RT Buy orders. Not missing RT Buy orders is a very good thing.

The proceeds from the last RT Sell are used to invest in quote coins.

Trigger: Price reaches the break-even point after an RT Sell or RT Sell Up order. This type of order is not user-configurable.

Accumulates? No. This harms accumulation. The proceeds from the last RT sell are used to buy back quote units, the result will be that you buy fewer units than sold in the previous order.

Try to avoid buybacks at all costs!

Trigger: A percentage above an RT Buy order, using a trailing range for reaching an optimal sell point. Configurable with RT_SELL_UPand TRAIL_ME_RT_SELL_RANGE.

You can use the Gunbot trend forecast indicator as additional confirmation when RT_SELL_UP is used. Configurable with RT_TREND_ENABLED.

Accumulates? Indirectly. As this trade happens above the last RT Buy rate, it generates more available base currency for the next buy order.

The next trade can then accumulate more because it has more funds available compared to the situation where the previous order would have been a regular RT Sell order.

Trigger: A percentage above an RT Sell order, as long as this rate is below the break-even point. Configurable with RT_BUY_UP_LEVEL.

Accumulates? No. This type of order is the same as a Buyback order: it buys back quote units at a higher rate than the previous sell order.

This will always result in a negative effect on accumulation.

Why use these optional RT trade types?

When Reversal Trading was first introduced in Gunbot, there were no optional trade types like RT Sell Up and RT Buy Up. These were introduced because they solve problems specific to RT.

You can be weeks into Reversal Trading and accumulated loads of quote, then suddenly you miss one RT Buy order and rates go up a lot, but not nearly enough to get close to the break-even point where a normal buyback order would occur. You are in no man’s land with no next trade insight.

This is where RT Buy Up can be great: it acts as a sort of reverse stop loss. You will lose some of the accumulated quote units, but the result of buying now will be better than waiting it out till prices eventually reach break-even. Better as in: it will leave you with more quote units.

In the same no man’s land way below break-even, it can happen that prices no longer go down and it becomes impossible to accumulate more quote coins using regular RT Buy orders, which always happen at a lower rate than an RT Sell.

RT Sell Up allows for trading the now sideways market, while still working towards the goal of accumulating more quote units.

Got it? Here are more tips for using RT

So, What do you think of the Gunbot Reversal Trading Ultimate Guide?

Please let us know in the comments below.

Join our community and automate your trades today! 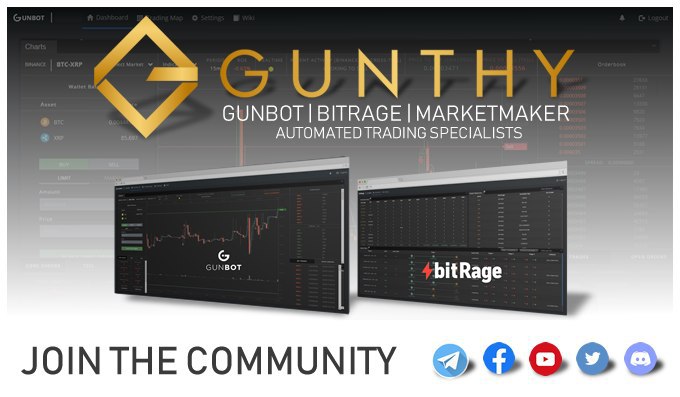 Read our latest news on any of these social networks!

We will send you breaking news right to your inbox