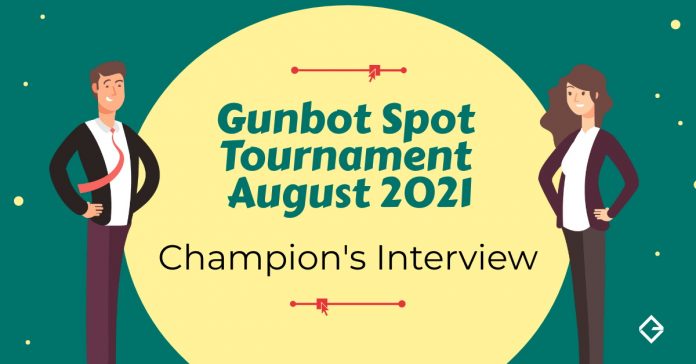 We interviewed the champions of the spot tournament. Let’s see what the pros can enlight us to improve as traders.

Why did you choose Gunbot as your bot for trading crypto?.

NIKSLOTER: I liked the idea of automated trading and the gunbot was the first bot I run into.

ANARCHY99: Heard from a friend about the good results and community behind it. Seemed to do a nice job while sleeping.

LUCKYFOX: Because it is a one-time payment, flexible, does not have a steep learning curve (at least you do not have to be a coding geek to use it), has an excellent selection of trading strategies with lots of parameters to modify to your liking, it is continuously improving with new features and great strategies and most importantly because it has an astonishing great community that is really active, helpful and polite.

NATASHA TOOMIKOS: Gunbot was one of the few bots available back in the day (2018).

What’s the best feature for you of Gunbot bot?.

ANARCHY99: All the new strategies and the people behind it, they rock!.

LUCKYFOX: Autocofig is awesome. Also, I know it is said many times, but I really like the active community and the great effort done by community members to help create/improve great strategies and ideas. Thank you all.

NATASHA TOOMIKOS: The stability which I can rely on.

What strategy did you use?.

ANARCHY99: Stepgrid, 15m tf with high tl, I picked my pairs based on the 4hr tf and bb200;1.5 the slope of the middle line of the bb had to go down and stabilize to zero before going back up, when the slope looked to be around zero, I would add the pair to the bot.

What wallet balance did you have at the start of the tournament ?.

LUCKYFOX: I do not remember exactly as I had four bots running the tournament, but it was around 600-700 USD for each bot. I added some more funds to each bot during the competition though (about 200 USD for each bot).

What estimated wallet balance did you end after the tournament?

LUCKYFOX: It is hard to remember the exact balance at the end of the tournament, but it was about 60 to 100 USD more than starting balance for each bot.

What’s the feature you would like to be added to Gunbot?

LUCKYFOX: There was a feature teased a while ago about the ability of gunbot to accept telegram signals/alerts. I have heard nothing about it since then. It would be super awesome if that feature is released. Another feature that I would like to have is having more DCA love. It would be nice if there are more indicator-based DCA DU methods (currently it is limited to Highbb, RSI, or percentage). Also, I and everyone else are eagerly waiting for a fully functional HFT release, hopefully soon.

What’s the most urgent need that needs to be Fixed or revamped?.

NIKSLOTER: It would be nice if the pair cycle time could be reduced. Maybe there should be a couple of flags in the config to turn off all calculations that are not used by the strategy for the pair. This is for the calculations that require API calls or extensive computation.

ANARCHY99: Pnl on tournament and pnl page in gb, I think im missing some of my pnl after for example the bot stops cycling. Deleting JSON files seems to solve the issue but my pnl is gone for previous days. I’m wondering if I was really the second. 😉

NATASHA TOOMIKOS: The PNL calculations on the Gunbot dashboard are way off. I made $ 600 profit on the tournament, Gunbot thought it was $ 1300. The Telegram notifications have the same issue.

Are u using any special add-on?.

ANARCHY99: No, plain stepgrid and adding my own pairs.

What makes u decide to use an add-on for your Gunbot?.

NIKSLOTER: I don´t use any.

Thanks for the interview folks, you rock!.

Remember to check out the Latest Gunbot stable release and Get your Bot now if you haven’t already!